Here are a couple of trivia questions for you:

Who are the “China Marines”?

What was Marine Colonel Samuel Howard forced to do on Corregidor that no other U.S. Marine officer had ever done? 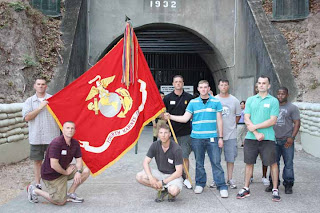 utbreak of WW II that they became known as the China Marines. In late November, 1941, only 10 days before the outbreak of WW II, most of the 4th Marine Regiment was shipped out of Shanghai and sent to the Philippines. They started in Olongapo, 750 of them, but were later strengthened to 1,600 men. Just before bombs began falling on Corregidor (December 29) the 4th Marines were moved to the island. They were assigned to quarters in Middleside Barracks, but were almost immediately deployed to their defensive positions. The 1st battalion was assigned to the tail of the island, while the 2nd and 3rd were positioned around the head of the island. Only the 1st, along with American Army and Filipino Scouts, were in position to take on the Japanese landing barges during the assault 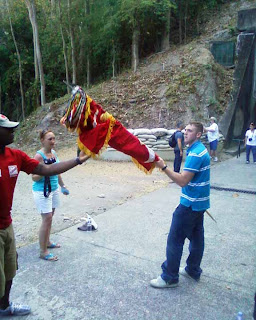 . It is said that members of the other Marine battalions were greatly upset to have missed the opportunity to kill any Japanese before the surrender.

Being Marines, they were resentful of being put directly under Army General Douglas MacArthur. MacArthur would not allow General Sutherland to include the marines in a recommendation for a presidential citation, saying, “The marines had enough glory in World War I.” At the same time, MacArthur had no problem seeking glory for himself, nor had he been short-changed in receiving WW I glorification. According to biographer William Manchester, “Of the 142 communiqués dispatched by the General during the first three months of the war, 109 mentioned only one soldier, Douglas MacArthur.” Despite MacArthur’s objection, the 4th Marines were awarded a presidential unit citation.

Colonel Howard, upon receiving the command, “Execute Pontiac,” which was the code to surrender, he is quoted as saying, “My God, I had to be the first Marine officer ever to surrender a regiment.” 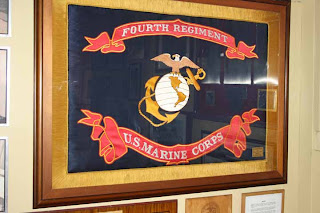 ho were in the Philippines for a “balikatan” (shoulder-to-shoulder) exercise with Filipino soldiers. Throughout the entire trip one marine carried a long, thin canvas bag with him; he appeared to be on a mission. Steve eventually asked and was told, “I’m carrying the 4th Marine Colors. We believe that it will be the first time that they are unfurled on Corregidor since the war.” Certainly these men were but a few, and they were very proud, so we guess that makes them U.S. Marines.

On Friday we got up early and traveled by banca to Cabcaben, the first step of a short trek to Angeles City, home of Clark Air Force Base. We had been invited to stay the night at the Wild Orchid Resort, and then escort of number of Aussies through Bataan to Corregidor for a tour. Having never taken public ground-transportation by ourselves any further than Balanga in Bataan, we had to learn how to get to Angeles on our own. Within a minute of getting to the main highway a Bataan Transit bus, much nicer than the ones we are used to taking to Balanga, stopped for us. We asked if it was going to San Fernando, Pampanga, which is the largest city near Angeles. Being assured that it did, we hopped aboard. Our surprise came when we got to the station in San Fernando. We expected to simply transfer to another bus, but were told, “No buses to Angeles. Jeep only.” We took a short tricycle ride to the jeepney stop, and after waiting on board for about a half hour, until the jeepney was filled with passengers, we were on our way to Dau, which is near Angeles. Dave, the hotel manager, had a staff driver collect us and take us to the beautiful Wild Orchid.

We arrived by 10:30, so we had the rest of the day to ourselves. Being Good Friday, almost all of the businesses were closed, with the notable exception of most of the bars and clubs for which Angeles is famous. We spent most of the day beside the resort’s two impressive pools, reading, occasionally swimming a bit to stay cool, and enjoying a very good seafood lunch. In the evening we took a walk through the ‘neighborhood,’ finding it interesting to note which business establishments were closed for Good Friday, and which were not. After looking in vain for a Yellow-Cab Pizza place, our hands down favorite here, we stopped at a small street-side café for their Margarita pizza – i.e., cheese, no clue why that is its name – with added onions. It was pretty good except for barely-mediocre crust, but pizza nonetheless, something we can’t get on Corregidor.

On Saturday morning we met the Aussies, most of whom are active duty or retired Special Forces men. We split into two vans, and headed first for Mount Samat. We were very surprised at how busy the shrine was, being Black Saturday. After viewing the huge cross and the sculpture, photo and battle-line displays we drove on to Mariveles to the Bataan Death March memorial at Kilometer Zero, and then ate lunch at the neighboring Jollibee.

After lunch we back-tracked about 10 kilometers along the highway – which is also the first part of the Death March route – to the pier at Kamaya Point where we were met by El Cor I, a large banca, for our cross 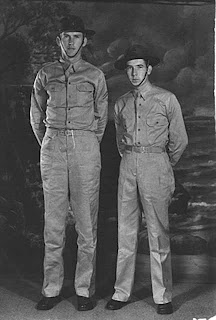 ing to Corregidor. We did the usual island historical tour, then said our goodbyes before the group boarded El Cor I for the return trip to their vans at Kamaya, and their ride back to Angeles. It was nice to spend the day with a group that has a strong appreciation for this part of history. We hope to see some of them return to Corregidor for a day of hiking.

April 23, was the 70th anniversary of Steve’s father Walter arriving on Corregidor, having departed from San Francisco on midnight of March 31/April 1, 1941. After a 22-day ride on the Republic, he arrived in Manila on the 22nd and was sent almost immediately across to the island. Attached is a picture of Walter (tall one on left) with an unknown soldier taken on Corregidor in the summer of 1941.
Posted by Steve and Marcia on the Rock at 12:00 AM