Many of you know that we have been working for a long time on a book about Steve’s father, Walter, who was a soldier on Bataan and Corregidor during the beginning months of World War II. We are pleased to announce that the book is now available throughout the Philippines at all National Bookstores and Powerbooks. On Corregidor, you can purchase a signed-by-the-author copy from Sun Cruises during your tour. 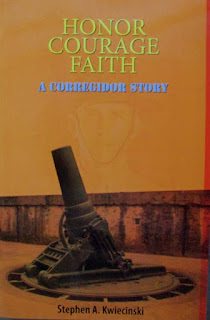 It has been a long haul, the initial chapters of the book having been written when Steve first came to Corregidor ten years ago. Since then, much has happened to us, as you well know. Because we are living in the Philippines most of the time, we decided that it would be far easier to seek a publisher here. The book was produced by Anvil Publishing, Inc., the largest publisher in the Philippines. They mostly publish schoolbooks; we learned that this is only their second book about World War II. Their first, “Jungle of No Mercy: Memoir of a Japanese Soldier” was written by a Japanese Filipino, Hiroyuki Mizuguchi, who was forced to serve in the Japanese Army. So, this is their first publication written from an American soldier’s point of view. Anvil is working on a process to make the book available to U.S. readers, and we will relay this information to you as soon as we are informed.

The back cover does a good job of introducing the book, so we reproduce its text here.

The story of a son tracing his father’s footsteps and discovering a true and inspirational story of courage, faith, and patriotism in the days of Bataan, Corregidor, and Japanese POW camps in WWII 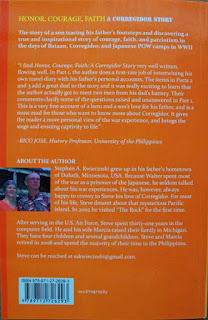 “I find Honor, Courage, Faith: A Corregidor Story very well written, flowing well. In Part 1, the author does a first-rate job of intertwining his own travel diary with his father's personal accounts. The items in Parts 2 and 3 add a great deal to the story and it was really exciting to learn that the author actually got to meet two men from his dad's battery. Their comments clarify some of the questions raised and unanswered in Part 1. This is a very fine account of a hero and a son's love for his father, and is a must-read for those who want to know more about Corregidor. It gives the reader a more personal view of the war experience, and brings the siege and ensuing captivity to life.”

ABOUT THE AUTHOR
Stephen A. Kwiecinski grew up in his father’s hometown of Duluth, Minnesota, USA. Because Walter spent most of the war as a prisoner of the Japanese, he seldom talked about his war experiences. He was, however, always happy to convey to Steve his love of Corregidor. For most of his life, Steve dreamt about that mysterious Pacific island. In 2002 he visited “The Rock” for the first time.

After serving in the U. S. Air Force, Steve spent thirty-one years in the computer field. He and his wife Marcia raised their family in Michigan. They have four children and several grandchildren. Steve and Marcia retired in 2008 and spend the majority of their time in the Philippines. [End of cover] 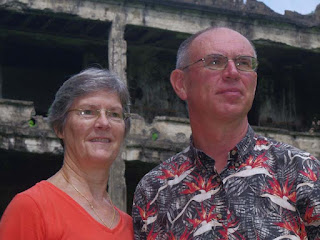 A few people have already given us feedback.

From an American who was with us on our April tour:

I've finished reading Steve's book and really enjoyed it, especially the first-hand accounts and the parts where he mentioned sites we visited (it was great to have a mental image to go with the words).

From Eli, a Filipino friend and avid newsletter follower, who found the book at a National Bookstore location in Metro Manila:

I finally finished reading the book with much enjoyment yesterday and found it to be a very well-written and researched story of a father’s war experiences by a loving son. It is also a very informative eye-opener to the later generations of the atrocities by the Japanese soldiers during the war. With God’s intervention, some prisoners miraculously survived the horrible and inhuman deprivations/treatments for others to know, most of which were too shocking and brutal to those with weak hearts and stomachs.

I agree that the Silver Star rightly belongs to Walter ‘Finch’ Kwiecinski and NOT to Walter Kulinski. Even the latter himself acknowledged that he was surprised receiving the award since Col. Massello didn’t even like him in the first place. It was a case of confusion because of two ‘Walters’ with surnames sounding almost the same. The decision to pay the Japanese internees from WWII $20,000.00 each later for “suffering and humiliation” was very unfair to their American and Filipino counterparts.

By the way, I like the picture of Walter with Steve pumping the well during a fishing trip. Walter's 6'6" height was greatly emphasized.

And an invitation from our friend Yuka, who read the book while with us on the April tour:

Both of you have been great host and hostess of our tour, and I thank you from the bottom of my heart for all your preparation, consideration and hospitality for every attendee, including those of us from Japan.

No one but Steve and Marcia could do that. It must be a challenging profession, but what you've been doing in Corregidor is just excellent, and I admire you both.

I hope you'll come over to Japan in a near future. You could have an event at Temple University in Tokyo and promote the sale of your book.

Thank you, Yuka, for the invitation to Japan. That would certainly be an experience! We wonder how well the book would be received there. (Although Walter had very bad experiences with most of the Japanese prison guards, he did talk about the occasional guard who would look the other way – at the risk of his own life – in order to let the starving prisoners steal food, something that may have kept them alive. He also talked about how sorry he felt for the masses of Japanese civilians he saw while he was in the POW camps there.)

The book has received favorable reviews in the Manila Bulletin, the Philippine Daily Inquirer, and at ABS-CBNnews.com.

Steve and Marcia on the Rock

P.S. Steve will be celebrating his second 30th birthday on Sunday, May 20.

Posted by Steve and Marcia on the Rock at 12:00 AM